Properly dosed glucosamine is not a given. It is with us. 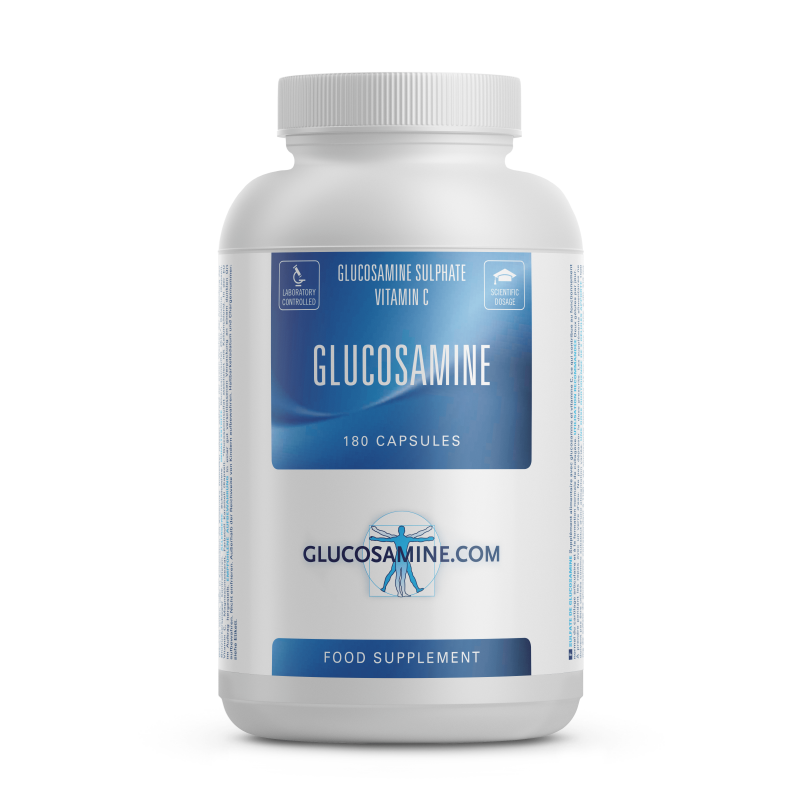 The recommended dose is 2 capsules per day (for a total 1500 mg of glucosamine sulphate).

The capsules can be taken at the same time or at intervals during the day, as you wish. It is preferable, however, to take the capsules at meal times or with plenty of water.

Glucosamine is harvested from the shells of shellfish, specifically shrimp and crab.

Glucosamine is one of the most popular nutritional supplements in the world - and for good reason. It contributes towards developing and maintaining healthy cartilage. Glucosamine also keeps joints supple through better lubrication.

The advantages of our glucosamine:

Glucosamine is a substance that occurs naturally in the body. It is an important building block in the human body. Glucosamine is used in building and maintaining cartilage, joint casings, tendons and other connective tissues. It also contributes to maintaining joint fluid. Glucosamine created by the body can be supplemented by additional glucosamine in the form of a nutritional supplement.

Glucosamine is ideal for protecting the joint cartilage of athletes which are train and perform under stress from sports (endurance or power).

It can also be used by elderly people to protect their joint cartilage in daily life. For them the effect of the supplement is generally noticed within a month. It may be noticeable even sooner, such as within a week. On the other hand, it may also take up to several months. This differs for each individual.

The protection provided by glucosamine lasts for some time (usually several weeks) after one stops taking it. After this period, however, the protection dwindles. Most people, therefore, take glucosamine without interruption.

Studies of long-term use (3 years) have revealed no serious side effects. Use for longer periods of time has not been studied in terms of safety. There are, however, no indications that uninterrupted use of this supplement would cause more side effects than the slight side effects that some people experience during the first weeks they take it. Glucosamine has been available for a good 30 years as a nutritional supplement outside the scientific setting. Serious side effects have not been reported at any time during this period.

Glucosamine can be combined with chondroitin for even better physiological effect. This supplement is available as a separate product from Glucosamine.com. Chondroitin has a strong protective effect on its own, but it is known above all for amplifying the effect of glucosamine. The superiority of this combination is substantiated by scientific research: a major independent US GAIT study in 2005.

If you opt for glucosamine from Glucosamine.com, you are choosing quality. We guarantee this quality as follows:

Glucosamine sulphate is frequently taken in doses that are too low. This generally happens due to ignorance.

The world (industry) of nutritional supplements has grown in leaps and bounds in the past decades. Previously this was the terrain of pioneers in the field of nutrition and health. Among these was our sister company Glucosamine.com, active since 2000. At the moment there are also a number of 'entrepreneurs' in this market who have little affinity with the philosophy it all started with.

Glucosamine.com pointed out this problem on their website as early as the beginning of 2002. Only since 2006 have glucosamine suppliers been required to indicate the quantity of glucosamine base (glucosamine without chemical binders) on the label, so that the consumer can see exactly what he or she is buying. But there are still suppliers who provide too low a dosage. Generally this is due to a lack of knowledge.

Glucosamine.com on the other hand specialises in the field of joint protection and glucosamine. You are guaranteed to get the correct dose from us.

Glucosamine can enhance the effect of the anticoagulants warfarine and coumarin. If you are taking these medicines we recommend you first discuss the use of glucosasmine with your doctor.

Glucosamine is harvested from the shells of shellfish. Some people are allergic to the flesh of shellfish. Even though the flesh is removed prior to using the shell, an allergic reaction cannot be completely excluded.

Specific research into the effect of glucosamine on blood sugar levels has shown, however, that when high doses of glucosamine are administered by infusion, insulin does not work as well. The body’s sensitivity to insulin decreases. In the case of healthy people who take a normal dose of glucosamine as a nutritional supplement (1500 mg per day), scientists have demonstrated several times that the effect of insulin is not disrupted.

There are indications, however, that people with type 2 (late onset) diabetes may be especially sensitive to glucosamine. We therefore advise diabetics to check their blood sugar levels regularly once they start to take glucosamine. Another option is to choose chondroitin, which does not have this possible side effect.

Considering that it was a small exploratory study, it means that the study did not comply to a number of important guidelines for scientific research. Researchers suggest also that this study needs to be validated by a bigger, well thought-out research. However, we do not want to take any chances advise the following:

Should you be looking for an alternative to glucosamine, try chondroitin.

Hypersensitivity of the stomach and digestive system

Glucosamine is a substance that occurs naturally in the body. Serious side effects have never been noted. Minor side effects that some people experience are generally related to hypersensitivity of the stomach and digestive system. In these cases nausea and excessive gastric acid are usually involved. Less frequently, constipation or even diarrhea can occur. Generally nausea and excessive gastric acid can be prevented by taking the supplement with one or two glasses of water or by eating something at the same time.

Glucosamine sulphate is stabilised with potassium chloride. The dose for one day (2 capsules) contains 268 mg of potassium. This is a little more than the quantity of potassium in half of a banana or 4 slices of whole grain bread. In the case of individuals with seriously impaired kidney function a higher intake of potassium can, however, have adverse effects. Individuals taking drugs to reduce potassium levels should restrict their potassium intake.

Do not use glucosamine if you are pregnant, planning to become pregnant or breastfeeding. The supplement has an extremely favourable safety profile, but no studies have been conducted that exclude possible adverse effects on the (unborn) child.

Use by younger people

The use of glucosamine sulphate by children and young adults is not advised. A fundamental point is that glucosamine sulphate supplements should not be started before the body is fully grown. ‘Fully grown’ is taken to mean both skeletal development and hormonal development. The reason that we recommend this is that no studies have been conducted regarding the safety of this supplement for children and young adults.