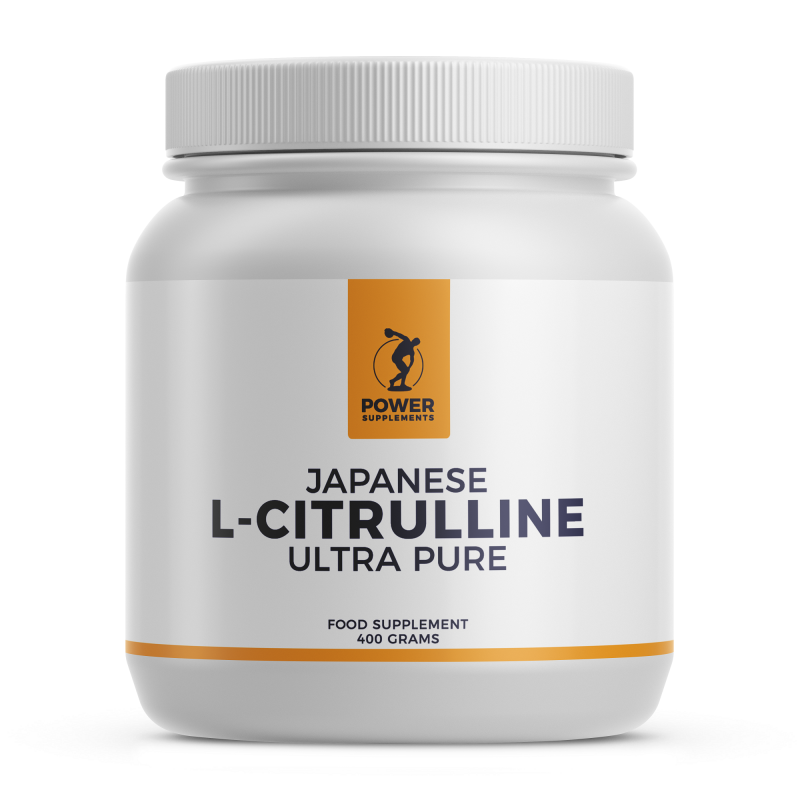 Take 1 to 2 scoops per day. Spread the intake at higher doses than 1 scoop. Take L-citrulline with some water during a meal or on an empty stomach. Build up the dosage gradually. Do not exceed the maximum dose of 2 scoops per day.

The amino acid L-citrulline promotes the production of nitric oxide (better known as nitrogen oxide, or NO) in the human body. Due to the stimulating or 'boosting' effect on NO, L-citrulline has the following effects:

A container with 400 grams of 'Japanese L-Citrulline NO-booster contains the same amount of NO-stimulating L-citrulline as 700 grams of citrulline malate. L-citrulline is also two times more effective than the other known NO-booster: L-arginine.

The L-citrulline in this supplement is produced by the leading Japanese manufacturer Kyowa Hakko.

NO, the good radical

NO (nitric oxide) is a pretty radical and reactive molecule. Free radicals have been seen as a negative aspectfor the human body for a long time. They would cause the body to 'rust'. But the body needs some radicals more than others. For instance they are essential for achieving an exercise effect. They help the body to adjust.
Effect of the NO radical in the body:

Anti-oxidants, such as vitamin C and vitamin E, deactivate the free radicals. According to research, high dosages of antioxidants can therefore hold back the training progress of young athletes.

As mentioned earlier, free radicals can cause the body to 'rust'. Technically speaking, the rusting process is referred to as 'oxidative damage'. It's been researched if the use of a NO-Booster in the form of L-citrulline also contributes to extra oxidative damage. It turns out that's not the case! Source  :PubMed. L-citrulline does not make you 'rust'!

It has been determined that various substances support the production of NO in our body. The best-known NO-Boosting Supplement is an amino acid called arginine. Arginine is being studied by scientists for years. In 2010 an article came out where the following was concluded, in a nutshell:

There is growing evidence that L-arginine reduces obesity in animals and humans. Recent research suggests that L-arginine supplementstimulates the growth of mitochondria (tiny energy factories of the cell) and also promotes the development of brown adipose tissue (which is good news because brown fat makes you slim due to its high energy consumption. L-arginine is a promising, safe and cost-effective way of reducing body fat, and increase muscle mass and improve the metabolism of humans and animals. (roughly summarized and translated from: Beneficial effects of L-arginine on Reducing obesity: potential mechanisms and Important Implications for human health).

Lastly, another disadvantage of arginine is that it can quickly lead to diarrhea. Citrulline is actually very mild and hardly irritates the intestines.

L-Malate is another name for malic acid. However, there is also something called a D-malate. This is a synthetic unnatural kind of malate. Fifty percent of the malate that can be found in virtually all supplements is D-malate. It is our belief that D-malate does not belong in our body.

If you still want the benefits of malate on your health, then you have a few options:

- Take our pure citrulline with one or two glasses of apple juice (1 g L-malate per glass).
- Take citrulline malate from a reputable provider (like Stimol from Biocodex).

Because the amino acid arginine (just like citrulline) is promising for the treatment of obesity, an estimate has been made over its long-term safety. Based on arginine administration in animals it turned out that negative long term effects cannot be expected. Scientists suspect that a person weighing 70kg could use a daily dose of 15 grams of arginine without any negative consequences. Source: PubMed.

We would like to point out that high doses of arginine (at least in the short term) led to stomach problems in many people. Think of diarrhea and stomach pain. A staggered intake over the course of the day may reduce this problem. It's a better idea to use citrulline. Citrulline converts to arginine and is more efficient in raising the arginine concentration level than arginine itself, as has been mentioned above.

The L-citrulline which Power Supplements uses for this dietary supplement is produced by Kyowa Hakko. This Japanese company specializes in the production of amino acids for food supplements and pharmaceutical applications. Kyowa Hakko uses sophisticated fermentation technology. Aside from production the company also focuses on research.

You won't find a purer L-citrulline supplement around.

Despite the high quality it's still offered at a low price

Power Supplements offers this expensive Japanese quality L-citrulline at a very low price. The price is comparable to many low-Citrulline Malate supplements on the internet. But with Power Supplements you can be sure that the low prices aren't because of the cheap ingredients produced under poorly inspected conditions.

Do not use in combination with cardiovascular medications and viagra, when you suffer from liver disease, during pregnancy or breastfeeding. People with a (latent) cold sore should only use L-citrulline in combination with the amino acid L-lysine. The use of synthetic citrulline-DL-malate could cause palpitations. If you notice these or any other side effects when using pure L-citrulline, please contact Power Supplements.