High levels of di- and tripeptides 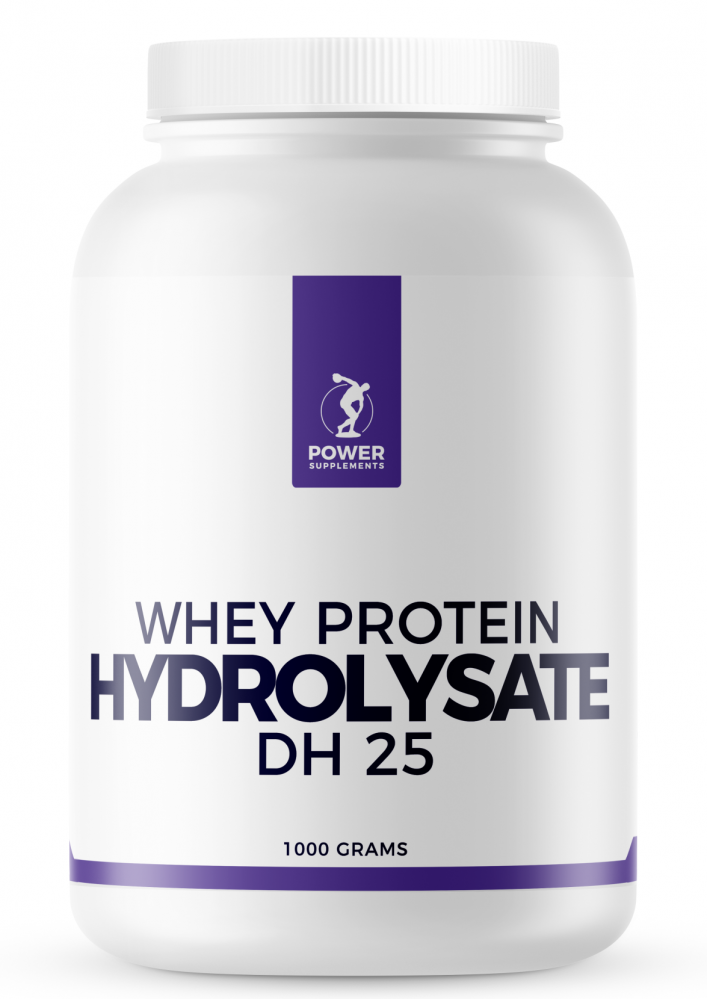 Mix 1 scoop of Whey Protein Hydrolysate (20 grams) with 300 to 400 ml of water, milk or fruit juice. When using a shaker: 2 firm shakes is sufficient.

For a synergistic muscle building effect after strength training Whey Protein Hydrolysate can be supplemented with BCAA's/L-leucine, creatine and rapidly absorbable sugars such as fruit juice.

Take 0.5 - 1 scoop Whey Protein Hydrolysate before, during and/or after training. Typical usage is 1 scoop of whey hydrolysate after training, and whey isolate 45 minutes before training. Spread the intake of doses that are greater than 1 scoop. Use a maximum of 3 scoops per training session.

One sample contains 20 grams of Whey Protein Hydrolysate and is sufficient for one whey protein shake when mixed with 300 to 400 ml of water, milk or fruit juice. There is a choice of 3 flavors (one of which is natural, which has a bitter taste).

Whey hydrolysate absorbs even faster than whey isolate, and whey concentrate and has an even stronger muscle building potential. A good whey hydrolysate hardly takes energy to digest and tones your muscles more quickly after an intensive workout.

An optimal hydrolysis comes down to the following:

Why a protein hydrolysate?

A protein hydrolysate is a protein that has been processed with enzymes. The enzymes have converted the protein to short chains of amino acids, known as peptides. The hydrolysis process is similar to what happens during the normal protein digestion in our diet.

Due to the enzymatic processing a protein hydrolizate can be more easily and rapidly absorbed than an intact protein. In a scenario of intense sports performance a quick absorption can be very beneficial. The recovery of the body in general, and the muscles in particular, can get going very quickly.

After the intake of carbohydrates (for example, fruit juice or bread), the body gives off insulin to absorb this food. When carbohydrates are combined with protein this effect is even stronger. Easily digestible carbohydrates in combination with a hydrolysate protein, however, result in the highest release of insulin. After strength training a high insulin level ensures a very strong muscle-building signal. Insulin is, in fact, the most powerful anabolic hormone produced by the human body. An even further increase of insulin can be achieved by using L-leucine and creatine or BCAAs on top of the carbohydrates and whey hydrolysate.

Overweight people have a reduced insulin sensitivity and should be careful with this insulin-boosting strategy. They are more inclined to build up fat tissue with an increased insulin level.

The absorption of a hydrolyzed protein requiresa lot less energy from the body, because the protein has to digest to a lesser extent. When it comes to recovery after exertion such an energy saver is a good thing. More energy remains available for recovery, any muscle growth and other training adaptations.

Food digestion also takes a lot of energy because the immune system reacts to proteins. Proteins are seen by the body as unwanted foreign substances that enter the body. An extensively hydrolyzed protein, however, is hardly seen as foreign. The immune system does not respond with an immune reaction to the di- and tri-peptides.

A less strong immune reaction means once again energy savings, and the possibility to recovery faster after exertion.

The above applies even more to people who do not tolerate casein and whey proteins very well. With them, the immune response against the intact proteins is stronger than normal. Because a hydrolysate protein is a hypoallergenic food in a sense is this group of people much less likely to suffer from the problems they experience with intact casein and whey proteins.

Lastly, people with a suboptimal functioning digestive system may benefit from the fact that a hydrolysate protein is 'predigested'. It will be a lot easier to rejuvenate after an intense training.

Whey Protein Hydrolysate DH25 has a very high degree of hydrolysis (DH) and therefore a high proportion of di- and tripeptides of 30 to 40%. The proportion of free amino acids remains limited to less than 5%. Short peptide chains up to about 8 amino acids include another 25 to 30% of the total. The mid-range chains of up to 40 amino acids add roughly another 30%. Only about 2.5% of the hydrolysate contains longer chains than 40 amino acids.

Most protein hydrolysates in sports supplements have a hydrolysis grade of DH4 to DH12. These hydrolysates are absorbed much slower and rather give an allergenic response. In addition, the stimulating effect on insulin secretion is partially lost.

Quality of the hydrolyzed protein

A well-known American supplement critic has written an article in which he expresses fierce criticism of protein hydrolysates. He does this by mentioning a scientific study.

In this study the absorption of amino acids is compared with about 30 grams of intact casein protein and the same amount of casein hydrolysate. The study shows that the amino acids of the strongly hydrolyzed casein only get into the muscles of the test subjects in limited quantities. The amino acids are on the other hand mainly absorbed by the internal organs. The conclusion of the critic is therefore that the casein hydrolysate is a useless supplement for athletes.

What this 'guru' doesn't realize is that this study was conducted on people who did not exercise at all! The muscles of the subjects thus had no increased demand for amino acids. The protein hydrolysate used in the study was of the very quick type (similar to Whey Protein Hydrolysate DH25). When the body can not properly process the rapid supply of amino acids in the muscles it will absorb it in the tissues with the fastest amino acid metabolism. These are the internal organs. You could compare this scenario to the following: You give people a 'post-workout shake' (an after-the-workout shake) with a lot of fast absorbing carbohydrates. But you only give it to the people who don't exercise. What happens to the carbohydrates? Those are not absorbed by the muscles but the fat tissue instead.

Could you conclude from this example that a post-workout shake causes obesity? No of course not. The post-workout shake use after your workout (during and right after is fine too). Just as well you use a high-dose of protein hydrolysate also when you exercise (before, during and/or after).

By the way, you could use a strongly hydrolyzed protein in small doses (half a scoop) during the day. Due to the low dosage the concentration of amino acids will not rise too high for the non-exercising body.

Take 0.5 - 1 scoop whey protein Hydrolysate DH25 before, during and/or after training. Typical usage is one scoop of hydrolysate after training, and whey isolate 45 minutes before training. Spread the intake of doses that are greater than 1 scoop. Use a maximum of three scoops per training session.

Food supplements should not be used to substitute a balanced diet.

# In accordance with legislation is the equivalent salt content (sodium chloride) calculated on the basis of the actual sodium content in the product. The sodium content is 640 mg per scoop. This product does not contain added salt.